Cheryl Iddings, An Angel In The Night


Over the next 14 years, she helped countless.


A Piqua native, Iddings worked other jobs including a dozen years at the Troy Daily News before volunteering for the program run by the county prosecutor's office after seeing a request for volunteers in a newspaper.


That was 2002 when Iddings underwent program training and assisted victims of crimes. When a full-time advocate left in 2005, she was hired for a staff position.


She continued in that role until the end of 2016, when she retired and was celebrated at a retirement reception at the office Dec. 30.


The job didn't change much over the years as Iddings would participate in the interviews with some victims and follow cases she responded to or was assigned through the criminal justice process. She attended court proceedings on her cases working primarily in the courtrooms of retired Judge Robert Lindeman and then Judge Christopher Gee in county Common Pleas Court.


Program advocates attempt to have the same advocate follow each case from its entry into the system until it is complete. Exceptions could be if a victim is a family member or acquaintance of the initial advocate. 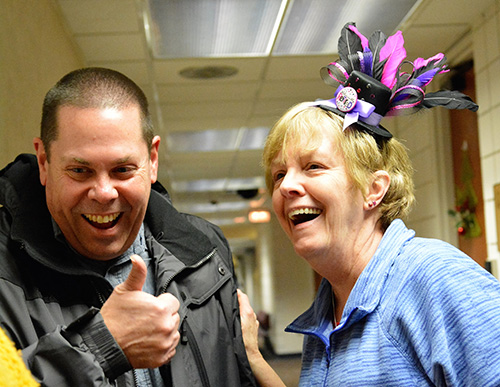 Among key responsibilities for advocates is accompanying police officers on death notifications. Iddings said she participated in hundreds of notifications over the years.


"You never get used to it," she said. "That is the hardest (part) especially when it is a teenager, a young person. We cry with them, hug them. We do anything they need to help." A goal is to avoid making notifications by phone, she said, adding she remembered only one situation when a call was made versus in-person notification.


The victim witness program advocates take turns being on call, with their services needed at all times of the day and night.


The job is one inviting burnout with the hours needed at times and helping deal with the tragic, emotional and at times frustrating situations victims encounter.


"I'm glad I did what I did when I did it," Iddings said. "I am getting close to 70. This is not an old person's job. For the most part I really enjoyed it. There were challenging times, as in any job."


One of her favorite tasks was working with law enforcement on the annual Christmas shopping program for children and families. A frustrating part was hearing offenders being ordered in court to make restitution and then seeing victims go unpaid, she said.


Former sheriff's Chief Deputy Dave Duchak, now sheriff, called the victim advocates "angels in the night" for their support of not only victims and families but also law enforcement officers with whom they work side by side.


"You get to know the officers. They are all good guys. I love them all. I pray for their safety every day because it is scary out there," Iddings said.


For her retirement, the county Fraternal Order of Police Lodge presented Iddings with an afghan featuring an angel with red hair, similar to hers. "It is so pretty. I love it, love it, love it," she said.


Iddings has a daughter Lori and her family and stepson Troy and his family making for five grandchildren and one great-grandchild.


In retirement, she soon will have an eye surgery, and then decide how she'll spend her time.


She asked to thank Prosecutor Tony Kendell for "his kindness and caring." She worked as Kendell's advocate when he was an assistant prosecutor.


"The whole office has been great," Iddings said. "I am going to miss them a lot."