Paul Bremigan loves the game of basketball. He loves it so much that, after more than 30 years as the coach in Russia, OH, he signed on to be the head basketball coach for the Troy boys varsity team. He, along with three (3) of his senior players, joined Troy Rotarians during the club's weekly meeting on November 21st to discuss the 2017-18 season. 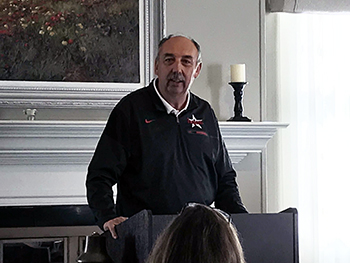 Bremigan spoke of the progress he's seen the team achieve, along with improvements in the overall program. For the upcoming games, his biggest concern is defensive aggressiveness that is needed on the court. Throughout the practices over the past several months, he's watched the players improve offensively, which will be key in better scoring during the games.


He said there are 30 students in the program this year, 12 of whom are freshmen. The players began practicing right after the last game of the 2016-17 season. Their workouts include weightlifting, open gym sessions, and team camps. The team is deep and balanced this year, and recently finished four-day per week open gym and conditioning sessions. They are now focused on programmed practices and scrimmaging neighboring teams.


Their first game is at home against St. Mary's on December 2nd. The schedule in December is very aggressive with several games against Greater Western Ohio Conference competitors. Bremigan and the entire team have high expectations for a successful season. For more information, visit www.troy.k12.oh.us/Athletics.