In the more than four decades since the Troy Strawberry Festival came into existence, many changes have been made to make the event more engaging for guests and profitable for nonprofits. Troy Rotarians learned more about the plans for the 2018 festival when they hosted Eric Roetter, the 42nd general manager and chairman, at their weekly meeting on November 14th. 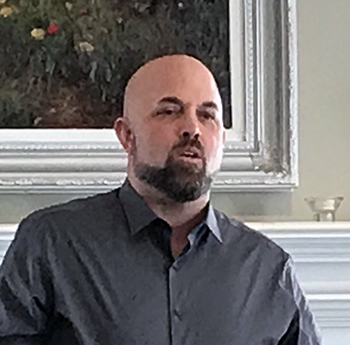 Roetter has been involved with the festival since 2000 when his son was named "Little Mr. Strawberry." Since then, he has volunteered for many roles and helped his wife during her tenure as chairwoman in 2014. He leads a team of more than 50 volunteers, each of whom handle various event committees and aspects of the festival. The total scope of the work includes security, booth management, cleanup, advertising, and all the necessary components for an event that attracts more than 150,000 guests each year. New for 2018 Strawberry Palooza will be the Friday night events out on Treasure Island. It will include the homegrown talent show, big wheel race, a crazy sock fun run, and other crowd favorites.


He admitted that the success of each festival is largely dependent on Mother Nature. In 2017, the perfect weather allowed an estimated 178,000 people to attend the event, helping nonprofits make nearly $393,000. The Troy High School Band Boosters sold 16,000 dozen strawberry donuts, putting them as the number one fundraiser of the festival.


The two-day event really happens over several weeks leading up to the first weekend in June. The Junior Golf Tournament, Queen's Pageant, Golden Couple Contest, and the Strawberry Festival Soccer Tournament all take place well before the first strawberry something is sold at the festival itself. Roetter urged everyone to volunteer to help make the 42nd festival the best one yet. For more information and to volunteer to help, visit www.gostrawberries.com.